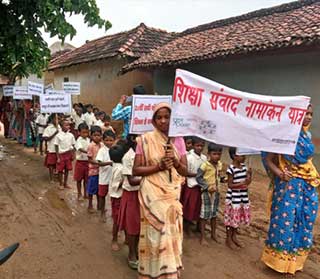 Three enrollment campaigns were conducted in Shikaripada in Shivtalla, Digalpahadi and Langopahadi villages for raising the awareness about education. The enrollments saw a participation of 88 SHG didis, 5 teachers and 228 students.

The enrollments were planned by the SHG member didis after Prajayatna conducted village organization orientation meetings for their VOs on the issue of community participation in ensuring better education for their children in the schools. During the meetings, it emerged that there is an urgent need to spread awareness among the community on the importance of education for their children. Since this is the part of the year when new academic session begins and enrolments take places, the didis decided that they will approach the school teachers and request them for a suitable date when they would be carrying out this campaign in their locality. As a part of preparation, they also visited all the houses in the village and asked the parents and the community members to participate in the campaign. Once the date was finalized, the didis approached Prajayatna which helped them with materials such as card and slogans to be used in the campaigns.

As a result of these campaigns, 8 new children were enrolled in Shivtalla, 14 in Digalpahadi and 1 in Langopahadi.