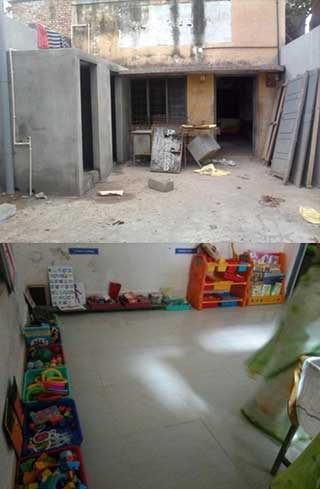 40 children were crammed into Anganwadi centers 1 and 2 of Kasturibanagar, both functioning from a single hall of 12x12 feet which belonged to the Bengaluru Bruhut Mahanagara Palike. They did not have separate places and were serving all these children in the hall which was congested for these many children. Even the mid-day meals of both the anganwadis were cooked in two separate corners of the hall itself.

The situation made it difficult for the anganwadis to function properly. Learning activities were difficult to be conducted in the congested space and since there was no toilet facility, the children could not be made to stay for long. The teachers were giving the children their lunch in boxes which they used to take to their homes at around 1 pm when the centers closed.

Parents meeting held in the center gave the parents a platform to see the condition of the centers themselves and ponder over what they could do to make the centers, to which their own children were coming, better places. Discussions were held on how the condition of the centers, including its basic facilities, could be improved so that children could learn something when they come here. It was observed that due to the prevailing conditions, children were not being able to learn anything in spite of coming to the centers daily. A plan was made in the meeting for getting separate and independent premises for the centers with basic amenities and resource persons who could be approached for this were also identified.

The parents met the local corporator and told him of the condition in which the centers were functioning and asked him to help them in improving the centers. The corporator initially agreed to repair the premises, but when he was told of the situation more clearly, he decided to get new premises constructed from the BBMP for one center while repairing the current hall so that another center could keep functioning comfortable from here itself. As a result a new center has been constructed in the space available in front of the hall while the hall has also been repaired. A common toilet and drinking water facilities have also been made available to the centers.

Now the centers are functioning from their own premises. Teachers are happy that now they can conduct the learning activities far more properly. The children are also happy and they stay in the centers for the whole duration. They have their lunch in the center itself with other children instead of taking it to their homes in boxes. Moreover, as the parents have seen the difference that their participation can make to the centers and in their children’s learning, their involvement with the centers has also gone up.