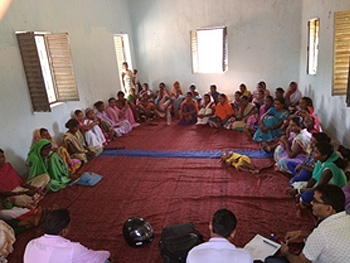 Prajayatna has always believed that in a democratic process, there has to be an effective and fruitful engagement of the communities for building long lasting, effective and sturdy institutions. While this process is tedious and slow, once it can be kick started it has the potential of awakening the people and bringing about long term change.

This beginning seem to happen recently in Raidih block of Gumla district in Jharkhand where after Prajayatna organized a Shikshan Gram Sabha, the community got together and dug up a well through voluntary labor for solving the problem of lack of drinking water in the primary school of Katasaru village located approximately 50 km from district headquarters.

The head teacher of the school Sri Dilip Minj, who is also from the same village, had written to the education department a number of times for appointing an additional teacher, which the department failed to do. When the post for the cook in the school became vacant, he called a meeting in the village and with the concurrence of all those present, he appointed Sri Ohma Tigya as the cook on the condition that he will also act as the highly required additional teacher.

Mrs. Airen Lakda has her home in Katasaru and is an active member of the local Self Help Group created by PRADAN in the village. After Prajayatna did meetings with the local Village Organization, she was selected to work as Education Change Vector (ECV) in the village for the betterment of school education system. She had attended the trainings organized by Prajayatna for ECVs after which she started visiting the school on a regular basis and started interacting with the teachers and the community in order to find out the issues faced by the school and how to solve them.

When Prajayatna organized a Shikshan Gram Sabha in March 2018 in the school, she played an important role in bringing different stakeholders to the meeting. During the meeting one of the issues that was raised prominently was the lack of accessible drinking water facility in the school’s vicinity. The school was dependant on a well approximately 400 meters away for all its water needs – both in kitchen and for drinking. Fetching the water from such a distance was a difficult task and the students had also to be involved in it on a daily basis. This resulted in the wastage of a lot of time of school which could otherwise be put to learning activities.

During the meeting, it was decided that the community members will work together and dig a well at a nearby place through voluntary labor. A piece of land was identified nearby for digging the well. However, the task faced another problem as the identified land belonged to another lady Savitri Devi who was initially reluctant in letting a public well be dug on her private land. However, during the meeting she was convinced by other people that the well would benefit the school immensely to which she and her husband agreed. 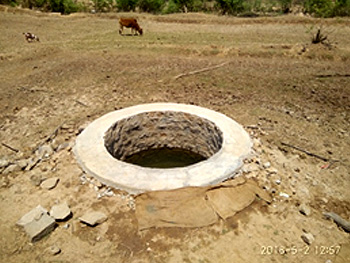 The work on digging the well started within three days of the meeting and it was completed within 4 days of it being started. Since during this period of time, villagers go to the nearby forests to collect Mahua (a flower which grows wildly and is used for many commercial purposes), the work on the well was done mostly in the second half of the day. Around 25 male and 30 female member of the village contributed their time and labor for this work which involved not only digging the well, but also bringing stones and cement from other places.

Sri Dilip Minj, head teacher of the school, spent Rs. 3100 from his own pocket for procuring stones and cement in this work. The new well is just 50 meters away from the school and is located near a small rivulet. This has not just decreased the distance of availability of water for the school, but has also ensured it of perennial, round-the-year supply of pure, drinking water for the children, hence solving a long standing problem of the school.